The Gaslamp District has been a historical landmark in San Diego for well over 100 years.  It covers 16½ blocks and extends from Broadway to Harbor Drive and from 4th Avenue to 6th Avenue.  It also includes 94 historic buildings.

This community is the center of downtown's night life.  However, it’s more than that, it’s home to thousands of Gaslamp condo owners who love to live in the midst of Downtown.  The Gaslamp Quarter has the convenience of a never-ending nightlife and the option to stroll amongst your own neighborhood, day and night, and feel secure and confident that you and your family are safe.

Since everyone is always looking for great dining options, the Gaslamp Quarter is known for that just that.  In this area alone, you will find hundreds of restaurants and café’s to choose from, and most with outside dining.  With 40 Nightclubs and bars, retail stores everywhere, a variety of entertainment including live theatres, what more could you ask for?

Located on the west side of Gaslamp between 1st and 4th Avenues is one of San Diego’s premiere shopping centers.  The Horton Plaza Mall is a multi-level outdoor center anchored by Nordstrom and Macy’s.  It also boasts over 130 retail stores along with a food court, fine dining establishments, an ice-skating rink, the UA Horton Plaza 14 Movie Theatre and the Lyceum Theatre where “live” productions are shown on stage.

If you’re a big baseball fan, then you’ll be glad to know that less than a mile away from the heart of the Gaslamp Quarter is PETCO Park, home to the San Diego Padres.  Other popular attractions which are close by include Balboa Park, with its many museums and the world famous San Diego Zoo, Seaport Village and the U.S.S. Midway Museum.  The San Diego International Airport is less than five miles from Downtown, which makes air traveling so convenient.

If you’re looking to make the Gaslamp Quarter your home, then you’ll be pleased to know about the following Condominiums for all types of buyers.

● Pacific Terrace Condos, 330 J Street – These one and two-bedroom condos are between Third and Fourth Avenues, adjacent to the Horton Grand Theater.

● Alta Condos, 575 6th Avenue – This 21-story high-rise consists of studios along with one and two-bedroom units.  With a beautiful view of the city’s skyline, it’s located just two blocks from PETCO Park (home of the San Diego Padres).

● Gaslamp City Square, 445 Island Avenue – These condos are in the heart of the Gaslamp District.

● Trellis 5th Avenue, 530 K Street – These units are located between Fifth Avenue and Sixth Avenue and are close to all restaurants, entertainment, grocery stores and parks.

With all that San Diego’s Downtown Gaslamp Quarter has to offer, it’s no wonder why it’s called the “Historic Heart of San Diego.”  Venture into this popular scene any day or night of the week and you will definitely agree residents and visitors alike enjoy the restaurants and the atmosphere of one of San Diego’s most popular destinations. 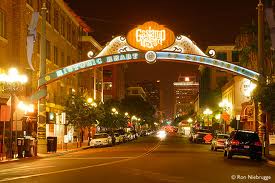 Rarely available southwest corner unit in the heart of downtown with iconic views of the 5th ave Gaslamp sign. This light, bright condo will sit perched above the newly p...

Stunning Live-Work Loft at the corner of 6th and Broadway in the heart of the Gaslamp Quarter of Downtown San Diego. Be in the hub of the city in this iconic French/Spani...

Are you ready to own part of the iconic Hard Rock Hotel! Every once in a while do you want a taste of the "Rock Star" lifestyle? This 5th floor one bedroom with a king be...

Need to invest before the end of year? Do you have 1031 exchange $ to invest? Ownership has it's privileges at the iconic Hard Rock Condo Hotel located at the entry to ...

Welcome to unit #911 at the "HARD ROCK" Hotel in San Diego's Gaslamp...the best location in downtown! This studio has amazing floor to ceiling windows to take in the view...

Own California's Hottest Lifestyle in the Gaslamp Downtown SD. The "Hard Rock" Hotel San Diego. This is an incredible opportunity to own a piece of the Rock! A Hard Rock ...

Own a piece of the Hard Rock Hotel! This King bedroom studio faces the convention center with views of the Coronado bridge! Enjoy the perks of Rock Royalty with private ...

This information is deemed reliable but not guaranteed. You should rely on this information only to decide whether or not to further investigate a particular property. BEFORE MAKING ANY OTHER DECISION, YOU SHOULD PERSONALLY INVESTIGATE THE FACTS (e.g. square footage and lot size) with the assistance of an appropriate professional. You may use this information only to identify properties you may be interested in investigating further. All uses except for personal, non-commercial use in accordance with the foregoing purpose are prohibited. Redistribution or copying of this information, any photographs or video tours is strictly prohibited. This information is derived from the Internet Data Exchange (IDX) service provided by San Diego MLS®. Displayed property listings may be held by a brokerage firm other than the broker and/or agent responsible for this display. The information and any photographs and video tours and the compilation from which they are derived is protected by copyright. Compilation © 2022 San Diego MLS®,

For Email Newsletters you can trust